Gandhiniketan schools celebrate religious functions belonging to all religions. In the month of September we had two important festivals celebrated by majority of the people in this country namely Vinayaka chaturthi (September 15th 2007) and Krishna Jeyanthi (September 3rd 2007) both were celebrated with bhajans and lectures and the students enjoyed them all.

On Vinayaka Chathurthi, in the higher secondary school a Bhajan was held and all the students and staff participated and Mr Palanisamy gave a lecture on Lord Ganesha following that, He said that according to Hindu tradition whatever work we start we should invoke the blessings of Lord Ganesha first and then proceed with the work. Lord Ganesha always bestows the blessings for those who seek. Prasad was distributed for all.

Similarly in the month of September Krishna Jeyanthi was also celebrated with the all the enthusiasm. The word Lord Krishna is the household name in this country. Lord Krishna gave the Bhagawad githa to the world and he is loved by one and all particularly by the children. Hence the celebrations were held in both the school and they enjoyed them. Mrs Vaigai, Tamil teacher gave a talk.

Vinobha and Bharathi day (11.09.2007) was celebrated in advance, due to the commencement of quarterly examination.

A special address about the life history of Vinobha was given by the AHM Mrs P Thilagavathi. In her speech, she said how a Brahmin boy named Vinayak born in Kakoda at Maharashtra, became Vinobhaji. Gandhiji said that Vinayak has come to the ashram to bless it, whereas others come there to get his blessings. Vinobha became a stern follower of Gandhiji. After independence, he started a movement named ‘Bhoothan Movement’. He collected land from the land lords and shared it among the landless poor people. He insisted our then prime minister Mr Jawaharlal Nehru to give importance to the villages in the ‘Five year plan’. He spent his remaining part of his life in his Bhavanar Ashram serving the down trodden in all possible ways. 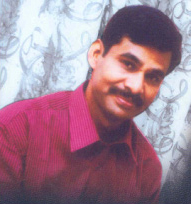 First of all he insisted on students discipline and culture. Bharathi’s name enlightens our mind. Any work should be an original one and not an imitative one. Shakespeare’s popularity will never die until English survives.

Bharathi brought a revolution in his writings. He never wrote to satisfy others but he expressed his own mental agony against the rule of the British people. He was poverty-stricken but still his mind and thoughts were rich. Students should be thankful to their teachers. He insisted them to read Bharathiyar’s poem daily and inhale its odour which makes one’s life prosperous.

His speech translated in Tamil as follows 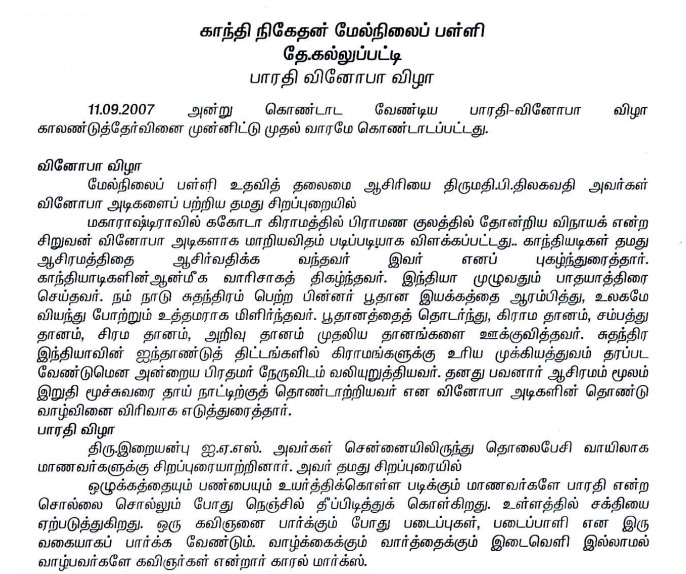 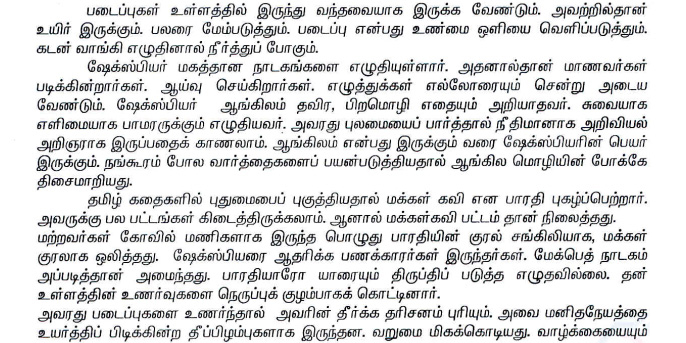 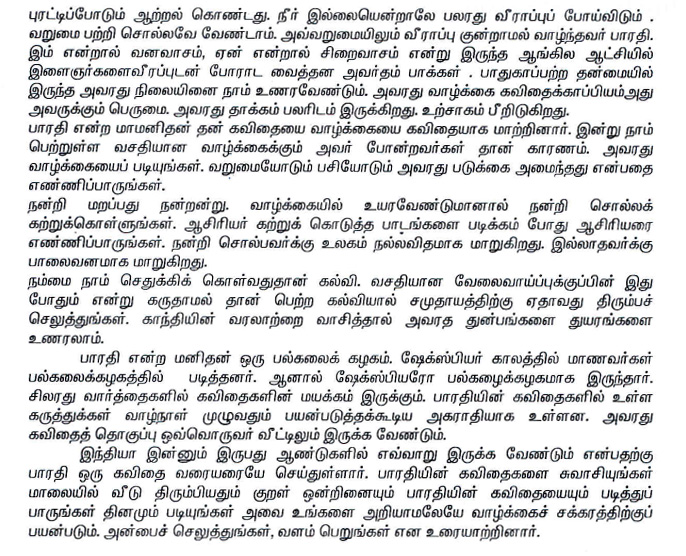 Gandhiniketan Ashram celebrated Gandhi Jayanthi on 02.10.2007 in a unique and grand manner. The celebration started with a morning special prayer at 6.00 am in Gandhi Mandapam, which was followed by a-day-long spinning. Ashram Chairman Prof. R. Venkataswami gave special message in the prayer.

Special meetings were conducted both in Primary and Higher Secondary Schools. Ashram president, Secretary and Dr. Sivarani, Committee member, graced the occasion with their elegant presence. Mr. Gopalakrihsnan Professor, Department of History, Madurai Kamaraj university was the chief guest and delivered his speech on how Gandhian ideals are relevant even today. He enumerated the various Gandhian principles and ideals and how they helped the down-trodden lay man to come up in life. He emotionally recollected his visits to Wardha Ashram and Agakan Palace. Our Secretary Dr. Ragupathi in his welcome address advised the students to follow Gandhian principles and lead a non-violent, peaceful and contended life. Our chairman Prof. R Venkataswami in his presidential address recollected where and how he met Gandhiji in Madurai amidst a roaring crowd and how the crowd was moved by the sight of the great man. He emphasized the importance of discipline in life and how Gandhiji followed it strictly throughout his life.

A special prayer at 6.00 am
at Kove Manimandapam

Relay spinning to mark the importance
of spinning in freedom struggle.

Prof Gopalakrishnan gave a special address
during the meeting

Students spinning on the dais

President and Secretary with the Chief Guest

Mr. Jenagaraj and Mr. Palanichamy celebrated Gandhi Jeyanthi in V.Ammapatti village. The Meeting commenced with the community prayer, in which the panchayat president and other rural public participated in large number saplings were planted in various places of the village and they were fenced for safety. Sweets were distributed.

Fifty NSS students under the leadership of Mr. Chandrasekar cleaned the water ways and constructed the bunds, in N. Meenatchipuram – Vaiyur. Kolam competition was conducted for village women and prizes were distributed. Saplings were planted in temple premises. A meeting was conducted in the evening and Gandhian values were explained to the rural public. Local VIPs graced the function.
Thiru. R. Balasubramanian, Mr. Ramanisekar, Mr. Vellaichamy, Mr. Lakshmanan,
Mrs.Vaigai and Mrs. Kayalvizhi led the scout students to Karaikeni village. Panchayat

President Thiru. Subbaiah presided over the function. A villupattu programme on Gandhji was performed by the students. Saplings were planted. Rural public enthusiastically participated in all the activities.

Our teachers planting a sapling

Our boys clearing the ground

The teachers and the local leaders
addressing the gathering

Mr Ramani and his team doing their bhajan

Saplings were planted. Students transported sand bricks and stones to the hill-temple’s renovation work. Every one appreciated this strenuous and tremendous work by the students and staff.

Dr.J C .Kumarappa institute of rural technology and Development trainees along with the principal and other staff of the Ashram celebrated at Solaipatti village in a grand manner, highlighting the values of Gandhian principles.

The Ashram Staff and Trainees of the institute reached Solipatti around 3.30 pm to celebrate Gandhi jayanthi in the village along with local people. Cleaning work was undertaken in the School Campus and Temple area. Bushes were cleared on the roadside.

The panchayat president Smt. LathaParamasivam presided over the public meeting conducted in the open maidan Sri.M.K.Selvaram, craft teacher of the local school welcomed the participants. The Principal of the Training Institute Sri.R.Rajaendran, panchayat union councilor Sri.Narayanasamy retired Head Master of at Higher Secondary School Sri.S.N.C.Nagaiyan, Headmistress of the school Smt Subbulakshmi spoke. Mahatma Gandhi was remembered for his great contribution to India’s freedom, constructive programmes for social and economic development of the country Sri. R Veearaj Lecture of the Training centre proposed vote of thanks.

In the cultural programme the School children’s and trainees participated and they performed dances, sang songs and enacted drama. The president and the people thanked and congratulated the Ashram and demand medical camp to the organized in the village. The celebration came to end around 8.00 pm.

The Women President of the
village giving a talk

A section of the audience in the village

Mr R Rajendran, Principal giving away the
Prizes for the students who participated in
elocution Competition on Mahatma Gandhi

Variety entertainment by the local students

The trainees from North east performing their dance

Gandhiniketan Higher Secondary school celebrated its annual sports day, in a grand manner on 19.10.2007. Programmes started sharply at 8.00 a.m. Our Ashram chairman Dr.R.Venkadasamy hoisted the national flag and accepted the salute during the march past.

Nearly eight hundred students participated in all the ninety-four field events and track events. There were excellent performances by the students. In High-Jump and pole-vault they were very close to the national records.

100 meters for the girls

Boys on the victory stand

Girls in the Victory Stand

Tug of war among the men teachers

The closing ceremony was graced by our chairman Dr.R.Venkatasamy, Mr.Anbu IPS Madurai SP and Mr.Rajarajan Peraiyur DSP. Our chairman in his presidential address urged the students to take active part in games and sports. He appealed to them to revive our traditional games like Kabadi, Kitti, Pambaram and Silambattam
Mr.Anbu IPS appreciated the students for their perfect discipline and extended his support to help the school in whatever way possible. He distributed prizes to the winners and medals to the champions. He handed over the shield to the best house.

The physical education department headed by Mr Kandasami and his colleagues Mr Subburaj ang Mrs Pankajam were honoured for the excellent way they conducted the sports day.

Saraswathi pooja was celebrated on 20.10.2007, with all solemnity. All the students, teachers, workers along with our chairman prof.R.Venkataswami and our Ashram committee member Dr.V.Sivarani assembled in the auditorium. a special Pooja was performed for goddess saraswathi Mrs.Banumathi and Mr.Kadambarajan conducted a special bajan involving the students and others. Mrs.Revathi illustrated the importance of the day and how evil was overcome by good on the day of Vijaya Dasami. She advised the students to pray goddess Saraswathi who will shower on us all her blessings which will help us gain immense mental and physical strength. Prasatham was distributed to all at the end of the festival.

Gandhiniketan Higher Secondary School conducted a science exhibition on 23.10.2007 and 24.10.2007. Madurai district collector S.S.Jawahar I.A.S, inaugurated the exhibition. In his welcome address Prof.R.Venkataswami, our Ashram Chairman advised the students to develop a scientific bent of mind. The collector in his special address expressed his immense happiness in visiting such a wonderful heritage school. He advised the students to inculcate and practice virtues like hard-work, honesty and sincerity. He appreciated the exhibits and applauded the students skill and involvement. The collector promised to extend any help for the development of the school and he handed-over nearly hundred note-books to our chairman for the use of poor students.

Collector being received by the President

The Chief Guest, President and the
Head mistress on the dais

Following that declared open the exhibition

VIP’s going around the exhibition

Dr.Perumal, Professor and Head of the Department, Organic chemistry, Madurai Kamaraj University, visited the exhibition on 24.10.2007. In his address to the students he enumerated his own experience as a village boy in school and college. He explained how he was able to rise up in position in spite of the hurdles which threaten the rural students. He advised the students to act with self-confidence and determination. He wished them to plan well and then to execute the plan.

He motivated the students that they can choose any subject and successfully complete the course which will assure then good jobs; but they have to study intensively with self confidence and involvement.

Local School students and public also visited the exhibition. All the students and teachers actively participated in the exhibition. Totally 359 exhibits including many working models were displayed in twelve class rooms. Kallupatti Government School Teachers Mrs.Meenatchi and Mrs.Rupavathi acted as Judges and selected the best one from each class and the best three in the whole exhibition.

On 14.10.07 Children’s day was celebrated with all enthusiasm. Mrs Shanthi teacher in Higher Secondary School spoke on Pandit Nehru contribution to our country and his particular interest in the welfare of the children of our country.

On 13.10.07 a drawing competition was held at three different level. A large number of students’ participated and inherent talents were brought out in drawings.

Children at the Drawing competition

A Cross section of Pictures

A Foreign student participating in the
celebrations at the Primary School